In the third installment of our series on BMSS Advisors & CPAs, we look at how their team members use ABLE to become accounting thought leaders. Since ABLE’s initial release, BMSS has been committed to incorporating the software into their firm. This commitment has allowed them to realize great success. Need to catch up on the rest of the series? Check out part one and part two!

“Every time I send out a thought leadership, I immediately start getting responses back,” explains John Shank, CPA, CGMA, founding member of BMSS. “The beauty of thought leadership [in ABLE] is I can send out some sort of information to a large group, but it looks like it’s coming from me individually.” For more details on exactly how ABLE’s thought leadership tool works, check out this article.

How Has BMSS Used Thought Leadership?

BMSS offers quarterly events, such as seminars. They invite thousands of contacts using a generic email blast, but RSVPs are few and far between. After the general eblast goes out, Shank started to sending out an invitation to his key contacts using ABLE. “’You may have already gotten this, but I wanted to let you know that we’re having this seminar.’ A very high percentage of those people say, ‘No, I didn’t get that, but sign me up, I want to go!’”

For a recent marketing event, Scott Stevens, CPA, CGMA sent out a reminder using ABLE. He hesitated, at first, to contact people he didn’t think were interested, but eventually decided to move ahead with it. He thought to himself, “even if they don’t come, it’s a plus that I show that I’m thinking about them.” Not only did his contacts appreciate the particular attention, but “probably half a dozen people that I didn’t think would come were there,” said Stevens.

Using ABLE’s thought leadership tool, Jaclyn Collins, CPA shared an article on using a 529 plan for private school funding with a number of her contacts. Immediately, one of her clients messaged her for more information. ABLE helped to get the conversation started. “We send out a firm newsletter that covers a lot of things,” explains Jaclyn. “But I think having a specific article that related to [my contact] helped generate a conversation with him that I would not have had otherwise.”

One of the great things about ABLE’s thought leadership tool is that it’s quick and easy. “We had a prospect that we pursued, but we didn’t get the initial pursuit,” explains Shank. “I happened to include them on a thought leadership without really thinking about it. Well, that person immediately responded back. This was a lead that had gone cold, and now I’ve rekindled that relationship.” Minimal effort resulted in key relationship improvement—that’s the magic of ABLE.

Check out this video for further details on using ABLE to become an accounting thought leader:

With ABLE on your side, you can do more. Schedule a demo today to learn if ABLE is the right fit for you. We’ll show you how you can achieve success like BMSS!

How the Right CRM Can Help You Reach New Clients

A CRM for accountants is the perfect tool for developing your client base and growing your firm—read more to find out how! Read More…

In this installment of “Our Big Ideas”—a series that examines the key features of ABLE—learn about the CRoPs Tiles system. Read More…

Don't take our word for it: here's what a client had to say about our free CRM demo. Learn about what it entails, and then sign up for your ABLE demo today! Read More… 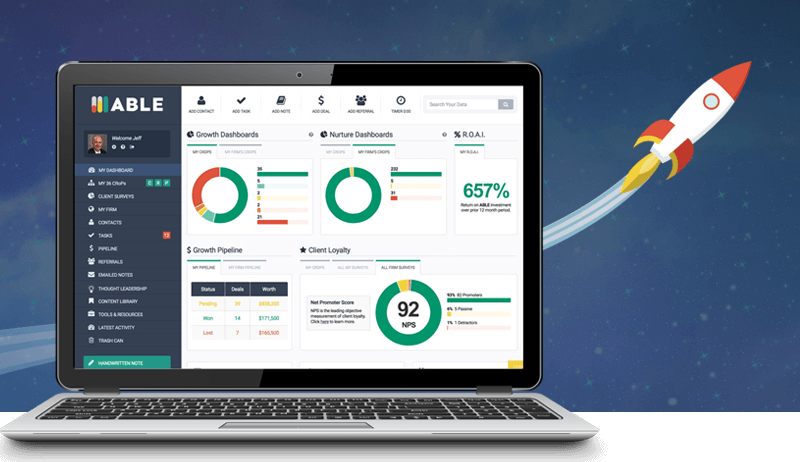